LUCIANO MARZIALI was born in Bergamo, Italy in 1976.

He began studying guitar at the age of eight and three yaers later he was admitted to the Donizetti Institute of Music, Bergamo, to study under maestro Giorgio Oltremari.

His many national and international awards include: 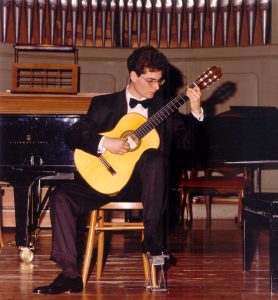 In 1999 Marziali graduated with top marks from Tilman Hoppstock’s master class at the Akademie für Tonkunst in Darmstadt, Germany.

In 2006, completing his courses in concert performance with Roberto Aussel in Cologne, he was awarded maximum recognition for the maturity of his performance at the renowned Konzertexamen, as well as his specialist’s degree in guitar instruction.

Luciano Marziali performs extensively in Europe and South America both as a soloist and as a member of various chamber music ensembles winnig critical and public acclaim: in duo with the German guitarist Tobias Kassung, in Fénix International Guitar Quartet with Prof. Hubert Käppel, Sotiris Malasiotis and Piraí Vaca and as soloist with the orchestras Junge Philharmonie Koln, WDR Sinfonie Orchester, WDR Rundfunk Orchester and Sinfonietta Köln under the direction of well-known conductors like Michail Jurowsky, Semyon Bychkov, Tan Dun, Völker Hartung and Cornelius Frowein.

He has also performed on several recordings, amoung other in 2002 with Fénix International Guitar Quartet and in 2003 as soloist with WDR Sinfonie Orchester.

Luciano Marziali’s first Solo CD The Guitar in 20th and 21st Century, produced in 2006 in cooperation with the Italian guitar magazine GuitArt, includes only original compositions for guitar: some late romantic jewels by Mario Castelnuovo-Tedesco und pieces by the contemporary composers Giovanni Podera, Livio Gianola and Pejman Kayvani. Some of these pieces are dedicated to Luciano Marziali and in this CD in their first world recording.

In Luciano Marziali’s second Solo CD Live in Cologne, produced by the Label KSGEXAUDIO, a live recording of a recital played in Cologne in 2007 is presented with compositions by Johann Sebastian Bach, Mauro Giuliani, Isaac Albéniz, Heitor Villa-Lobos and Mario Castelnuovo-Tedesco. 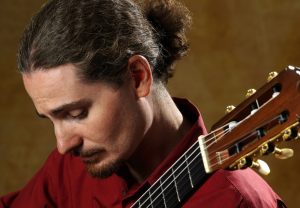 Luciano Marziali attended master classes by the well-known guitarists David Russell, Tilman Hoppstock, Angelo Gilardino, Thomas Müller-Pering, Simon Dinnigan, Hubert Käppel, Roberto Aussel and Dusan Bogdanovic, who hailed him as one of the best Italian guitarists of his generation, for his masterful technique and for the depth and sensitivity of his performance.

Additionally, in 2014 he created (along with his colleague Jhon Jimenez) the online TV channel Guitar TV World, which is dedicated to the guitar with the aim to further spread the appreciation for this splendid instrument throughout the world.

He is regularly invited as a teacher at several European master classes and guitar festivals.

Luciano Marziali lives in Cologne, where he combines solo and chamber music performances with teaching.